For some reason, the sum of the inverse of the square of all natural positive numbers is . This sum is also called the function ζ(2) of Riemann and the search of its value the Basel problem.

In this article, I cover the proof of this equality step by step. For understanding this proof, no advanced mathematical knowledge is required, the advanced topics required for the proof will be explained further ahead.

For this proof we are going to start from this double integral of a function of two variables.

Our first task is to solve this double integral. How? It’s easier than it looks. Basically, we are going to integrate first with respect to x and then with respect to y. So we could write the expression this way:

I assume that you can solve these integrals. Surprisingly, we obtain:

I hope that now that weird double integral of the beginning looks more related with our proof. So let’s try to simplify the expression when we have our series.

Now, our function is a geometric series, but we need to transform the power n-1 to n, and start from 0 instead of 1.

Ok, now we have a geometric series than can be easily simplified. Moreover, we know that the term xy it’s going to be less than 1, because the limits of integration go from 0 to 1. Therefore x and y will take values from 0 to 1.

Fortunately, a geometric series whose term’s absolute value is lower than 1 can be simplified this way:

Hence we have the following equality:

Overview of functions of two variables

I told you that advanced mathematical knowledge wasn’t required. However, we’ve been working with double integrals and functions of two variables. So, what’s going on? Well, unfortunately, there is no way to understand this proof without certain concepts, so we’ll take a look at these concepts.

Let’s start with the original concept of integral. An integral can be imagined as a sum of a lot of rectangles with base dx, and height f(x): 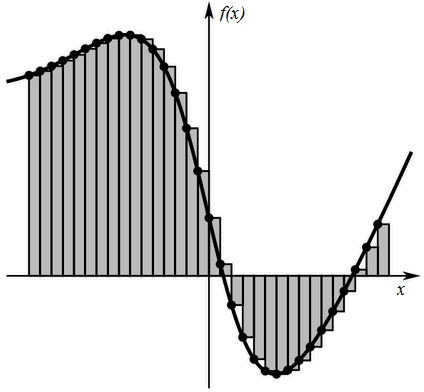 But if we have a function of two variables the idea changes.

First of all, unlike a function of one variable, we can’t represent it like a 2D curve. Now, for the function f(x,y) we can obtain infinite values of the function with the same x changing the y and vice versa. So if we represent it, we’ll see something like a mesh or a surface. Something like this example (not our function). 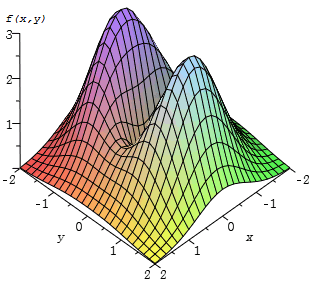 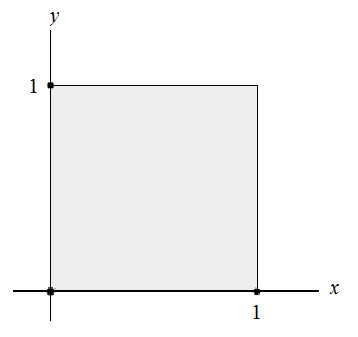 In order to obtain our appreciated proof we will integrate by substitution. In this case, we are doing a a linear change of coordinates. Instead of x and y we will work with u and v. And these new variables have the following values:

We can also express x and y in terms of u and v:

Ok, so what’s next? Well, actually we have to complete three main tasks. All these things are also necessary when working with one variable functions but in that case many things are simplified and look trivial.

The 3 things that we have to change are:

All the steps can be explained with the following intimidating expression:

This is the easiest and best known step. All we have to do is to replace x and y with their values expressed with respect to u and v.

It can be simplified to:

Because we have changed the variables of the function, we can’t keep our old differentials. Therefore we need to find a way to express du dv with respect to dx dy. Something like this.

Fortunately or unfortunately, someone already thought about it and developed the Jacobian Determinant (J). We must notice that du and dv depend on how x and y derive, this is because both are expressed with respect to x and y, and vice versa.

And its result is the derivative of the function that express x with respect to u and v but considering v as a constant.

So finally, the J that we are looking for is the following determinant:

Hence we can substitute the differentials:

So now, we have a rotated and scaled square:

But we have to figure out how to express these new limits. First of all we can notice that if we split the new square in two parts, above and below edge u, the function values are equal in both parts. Why?

Basically, because u and v are squared in the function, so the function will produce the same values no matter if the variables are positive or negative. So we will calculate only the upper part and multiply by 2. And to make it easier, we will split the upper part in two parts. 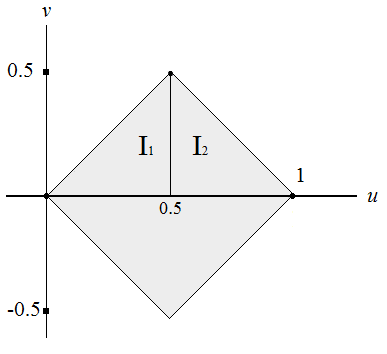 The limits of I1 and I2 in the u edge are [0,1/2] and [1/2,1] respectively. The tricky part is finding the limits of v. Well, fortunately we can represent the value of v as a function of u, actually, the limits of v is the function u in I1, and 1-u in I2. So our new limits of integration are:

After all this long reasoning we have the following identity:

Arctangent is the key

We will solve our integrals using the integral of arctangent:

Therefore, if we solve the first integral and apply the fundamental theorem of calculus we obtain:

This is great. You don’t know yet but we have the integral of a function multiplied by its derivative. We will define new variables to simplify it:

And for the second part we have:

If we replace in the expression we get:

But if we use the following property of integrals everything can be easily simplified:

Finally, if we use some trigonometric properties to simplify the result of the functions we get:

I want to thank Dr. F. Guil Asensio and Dr. G.M. Diaz-Toca their help for understanding the concepts covered in this article, a computer scientist like me couldn’t have ever understand it without their help.